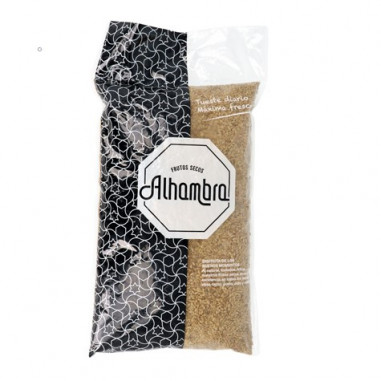 The Golden Flax Seeds from Alhambra have great nutritional benefits that you can take advantage of in your day to day:

Place your order in less than
12:34:56
to receive it tomorrow If you place an order now, it will leave tomorrow from our warehouse and you will receive it in 24 hours
Tomorrow

The Golden Flax Seeds from Alhambra come from the flax plant. Its stems are used to extract the flax fiber used in clothing and its seed is used mainly as a food with great nutritional benefits.

In addition, flax seeds have multiple benefits at a nutritional level, among which the protection of the cardiovascular system stands out due to its omega 3< /strong>, which also helps to prevent the accumulation of triglycerides and cholesterol.

Several studies confirm that flax seeds reduce generalized inflammation thanks to omega 3, which causes lower levels of protein C reactive, which is what indicates the degree of inflammation. Talso have benefits at the intestinal level, since they contain a large amount of fiber, among which mucilage stands out, which when dissolved in water forms a gel that increases the size of the stool < strong>facilitating their mobility.

As for their use, they should be ground or soaked before consuming. They can be added to yogurts, smoothed cheese, salads, vegetable creams, homemade bread strong> or confectionerya. They can replace breadcrumbs or you can use them to prepare your own vegetable drink.

Frutos Secos Alhambra is a family business located in Peligros, next to the city of Granada, Spain. They are dedicated to the selection, processing, packaging and distribution of nuts, dehydrated fruits and dried fruits in Andalusia and other regions of Spain.

Instructions for use: pre-soak them or grind them

Storage: Store at room temperature, in a cool, dry place protected from light

It may contain traces of  sesame, soy, and nuts and mustard.

Please, login to leave a review

Add-Ons for this product